Biophysics and Molecular Biology: Deciphering the specificity of protein degradation 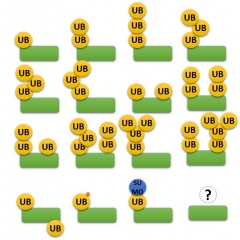 One half percent of protein in our body is synthesized daily, while the same is catabolized to maintain homeostasis. Effective protein degradation thus must be carried out with no less efficiency and precision (specificity) than transcription and translation. Central in a large number of biological functions is the ubiquitin-proteasome system responsible for the spatial and temporal control of protein stability. As many cellular processes are regulated by transcription/translation, tuning the rates of protein degradation has been shown to be involved in regulating cell cycle progression and differentiation. To meet the specificity requirement for protein degradation, ubiquitylation pathways conjugate ubiquitin, a 76-amino-acid small protein, to lysine residues on targets and ubiquitin itself, and generate a large number of ubiquitin configurations; this has been called the “ubiquitin code”, that must be read by the proteasome and converted into a rate of degradation. The proteasome itself plays a central role in determining the fate of ubiquitylated proteins. Due to its complexity and experimental challenges, we still do not understand the rules by which the proteasome recognizes those ubiquitin configurations and commits the destined substrate into an irreversible degradation process.

Systems Biology: Developing quantitative and high-throughput methods for the studies of protein degradation

A common challenge to the study of biology is the complexity of living organisms and the nonlinearity of the interactions between components. Quantitative and high-throughput methods which, to a great extent, fostered the great success of molecular biology in the past few decades allow navigating the complexity of molecular components in a living organism with accurate information to understand the system-level properties inherent to its biological functions.  However, limitations of these methods do exist and have quickly became a major obstacle to the further understanding of biological systems. As a prominent example, most high-throughput methods, e.g. microarrays, deep sequencing and ribosome profiling, aimed at understanding gene expression operate along the central dogma, focusing on transcription and translation. As demonstrated by many comparative studies, protein and mRNA abundance only show low to modest level of correlation, especially for low abundant proteins enriched with important regulatory factors.

We are committed to developing quantitative and high-throughput methods by capturing the degradation intermediates at different physiological stages to facilitate functional and mechanistic discoveries regarding the protein degradation.

For long, the lack of structural information about the 26S proteasome greatly hindered the study of ubiquitin-mediated protein degradation and prevented structure-based drug

design targeting the 26S proteasome. Using an improved method for proteasome purification and cryo-electron microscopy with unsupervised structural classification, we resolved the first high-resolution structure of human 26S proteasome to 4.2Å using cryo-electron microscopy, with molecular details at certain regions. This structure helps to resolve several important questions in the field, namely, the state of the 20S proteasome gate and the nucleotide-binding status of proteasomal ATPases. In the same work, we also identified 3 alternative conformations of the proteasome, which suggests a mechanism for 20S gate opening and substrate translocation. In a separate work, we provided the first high-resolution structure of human free 19S proteasome with its chaperone gankyrin, showing a continuous open-close transition in its AAA+ domains. This exposed to us the molecular mechanism governing the large-scale conformational change of the lid subcomplex during 26S proteasome assembly/activation and the role of gankyrin in promoting correct assembly of the 26S holoenzyme.

For complex molecular machines such as the 26S proteasome, functional and structural connections are highly nontrivial. We aim to develop novel classification and analysis methods to explore the conformational spaces of the proteasome and apply molecular dynamics simulation and modeling to understand how it carries out the highly specific protein degradation. 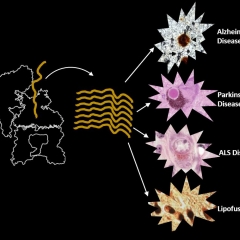 Amyotrophic Lateral Sclerosis (ALS) is a neurodegenerative disorder primarily affecting the upper and lower motor neurons.  A hallmark of ALS is the disruption of protein homeostasis due to the inhibition of proteasome-mediated protein degradation and autophagy in affected cells. Approximately 20% of familial ALS cases carry mutations in the gene superoxide dismutase 1 (SOD1) whose product is responsible for free radical scavenging. Cellular surveillance systems identify mutant or misfolded SOD1 and summon several ubiquitin ligases to tag the abnormal proteins for proteasomal degradation. Proteasome impairment is well documented in affected motor neurons by mutant SOD1. It has been suggested that an age-dependent decline of proteasomal activity may underlie the gradual accumulation of misfolded SOD1 which in turn further inactivates the proteasome in a vicious cycle and exacerbates the progression of neurodegeneration. Regardless of the importance of protein degradation in ALS pathogenesis, we still do not understand how the proteasome processes the abnormal SOD1 and how mutant SOD1 becomes an inhibitor of the proteasome. Elucidating the interplay between the misfolded SOD1 and proteasome will shed light on many important questions in the field, namely, whether there is a ‘forgotten pool’ that is degraded by neither the proteasome nor autophagy, how SOD1 aggregates inhibit the proteasome, and why the tendency of SOD1 mutants to accumulate varies dramatically in different tissues.

Here, we will use single-molecule fluorescence microscopy in combination with microfluidic control to study the kinetic pathways leading to the aggregation of different forms of SOD1, as well as how these aggregates may evade proteasomal degradation and damage motor neuron functions. 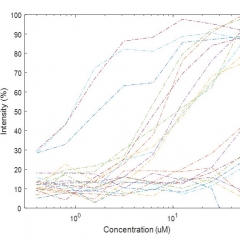 Dynamic regulation of protein expression level is achieved by a combination of protein synthesis and degradation. Several adaptable systems, consisting of ribosomes, chaperones, lysosomes and ubiquitin-proteasome system (UPS), respond to different external and cellular signaling to maintain protein homeostasis. Loss of proteostasis is a hallmark of aging and aging-related diseases. Particularly, disruption of the ubiquitin-proteasome system has been shown to be involved in a large number of diseases such as cancer, autoimmunity, cardiomyopathy, and neurodegeneration. Recently, restoring or modulating proteostasis emerges as a very promising direction for the treatment of those diseases. For example, proteasome inhibitors, such as Bortezomib and Carfilzomib, have demonstrated strong efficacy in treating several cancers including multiple myeloma.

Severe inhibition of the proteasome has been reported in aged people and patients with neurodegenerative diseases, including Alzheimer’s disease, Parkinson disease and ALS.  Ectopic proteasome activation increases the life span of yeast and nematodes, and ameliorates the Alzheimer’s phenotype in a mouse model.  Activators of the proteasome propose an efficacy in treating neurodegeneration and other age-dependent diseases.

In previously studies, we developed a novel reporter system that can accurately measure the ubiquitin-dependent activity of the 26S proteasome. We are developing screening platforms based on these reporters to explore the pharmacological space for modulating the proteasomal activities.